TicTocTrack has been announced as finalists in the 2014 MyBusiness Awards.

The TicTocTrack watch – launched by mother of two and businesswoman Karen Cantwell and education expert Simon Da Roza this year – is one of five Australian companies to be shortlisted nationally for its ‘Best Use of Technology’. 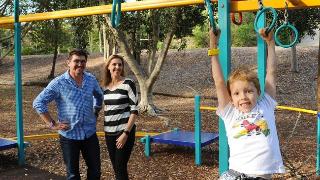 As a mother of two young sons, Ms Cantwell said any parent can identify with the panic of losing sight of a child in a shopping centre or the concerns that arise when a child is running late getting home from school.

“We’ve all experienced it; time stands still and it feels like the longest minutes of your life. When my son started school, it made me aware of all the other safety variables that come into their lives as they develop natural independence,” Ms Cantwell said.

At the time Ms Cantwell was working in the events industry and using tracking technology to ‘log’ people into large events.

“I wondered if the technology could be applied to children, so parents could check that their kids had arrived at school safely – or be alerted if they wandered off kindy grounds, as well as finding a child when they’re missing in general,” Ms Cantwell said.

Ms Cantwell joined forces with Mr Da Roza (both pictured right), who has 25 years experience as a school Principal and teacher, specialising in early education and play, and was her son’s teacher at the time.

The resulting TicTocTrack watch allows parents to create ‘geo-fences’ around safe areas for their children to play or stay in; be it a neighbourhood, sports grounds, school or friend’s house. The parent is alerted if they leave these zones, allowing them to contact the child via a two-way voice function while locating them on their desktop or smartphone. If children are in distress or feeling unsafe, they can contact their parents with a press of the SOS button on the watch.

The watch means children explore the world without their parents or carers always ‘hovering’ over them; something Mr Da Roza said is integral to child development.

“Physically, mentally and socially, independent play and the ability for a child have the freedom to be outside their parent’s gaze – without being totally out of touch with them – is immensely important,” Mr Da Roza said.

“Research, along with anecdotal evidence I’ve collected over 25 years in early childhood education all points to the fact that children need greater amounts of active playtime, be encouraged to discover, take small risks and challenge themselves a lot more than the average modern child is able to.

“Some clients use the watch for their young children when they’re at a park or playdate; while parents of older children use it as safety support when catching public transport, playing in the neighbourhood or going for a run to exercise. There are also applications for children with Autism Spectrum Disorder and Dementia patients.

TicTocTrack is available through www.tictoctrack.com.au. The winner of the MyBusiness Awards will be announced on the 11th of November.

About the Author: David Forshaw